All Collections
Products
Megahydrate
How does Megahydrate work?

How does Megahydrate work?

Dramatic breakthroughs in overcoming disease are being published in some of the world’s most prestigious Scientific journals as a result of the Hydration movement. At the same time, thousands of Scientists and Medical Doctors around the world like F. Batmanghelidj, MD (also F. Batmanghelidj, MD), are evangelizing the popular prescription for health, “Don’t over-medicate, HYDRATE!”

Science and Medicine have been seeking and studying miracle healing waters for decades. High elevation regions such as the Hunza in Pakistan, Vilcabamba in Ecuador, Badenbaden in Germany, and others have been reputed to have healing waters for many generations. The fact is people who live in these regions and drink the water are known to live long, healthy, active lives well over 100 years of age. For ages, man has made pilgrimages to these remote regions in order to drink their “healing waters.”

For over three decades, Dr. Patrick Flanagan™ has studied the remote regions of the world where people live healthy active lives past the age of 100 years. While the diets in these regions differed dramatically, Dr. Flanagan™ discovered the amazing fact that the drinking water in these regions was almost identical and came from frozen glaciers that had melted. This water, known in some circles as “glacial milk,” displays some very distinct physical differences from the water that most of the civilized world is drinking.

The surface tension of glacial milk is much lower. This means that the water can be absorbed directly into the cells of the body with much greater ease facilitating hydration and nutrient uptake. It also means that waste materials can be removed from the cells more easily by the same life-giving water. Dr. Flanagan™ also discovered that glacial milk, or “life water,” had very distinct physical properties of viscosity, heat, and energy potential. After decades of laboratory and field research and study, Dr. Flanagan™ uncovered what may be the most important discovery about the true nature of hydration. He discovered why the waters are so different and can hydrate the human cell so effectively where people of these remote regions live well past 100 years of age.

For thousands of years, man has trekked to the mountains and the sea for physical, emotional, and spiritual replenishment. Dr. Flanagan™ discovered that the water from these regions contains massive quantities of negatively-charged hydrogen ions. Several decades ago, this fact was confirmed by other scientists. Negatively-charged ions have proven to be highly beneficial to the human organism.

Hydrogen is one of the primordial elements that fuel the development of all life on Earth. Provided by the Sun as rays of light, human beings cannot live without Hydrogen. While science refers to us as carbon-based life forms, man is actually a Silica-based and Hydrogen-based life form. All life on Earth is Hydrogen-based. When plants absorb sunlight, they store negatively-charged Hydrogen ions through the process of photosynthesis. When you eat unprocessed plants, your body’s cells utilize the nutrients in those plants and, perhaps more importantly, the electrical charge of the Hydrogen ions in those plants. When your body burns Hydrogen and Oxygen, it generates the energy you need for every single process of life. As a matter of fact, nearly every life form on the planet utilizes Hydrogen and Oxygen to generate energy. The key is that without Hydrogen, there is no life.

Due in no small part to mass food production, mineral deficient soil, pesticides, chemical fertilizers, over-processing of foods, the addition of chemical preservatives, and drinking over-chlorinated and over-fluoridated water, millions of individuals are not getting enough Hydrogen ions daily. Cell damage occurs when the body has insufficient Hydrogen ions (and sufficient Oxygen). The body’s cells become oxidized like Oxygen rusts iron.

When certain chemicals in the body lose an electron, they become positively charged (and are called “free radicals” or “oxidants”). These chemicals roam freely through the rest of the body stealing electrons from other cells. Free radicals damage cellular DNA. The majority of modern science has come to the conclusion that free radical damage in the human body is the cause of aging. Science has also discovered that aging is not a natural function of time passing. Aging is evidence of the damage to millions of the body’s cells through oxidation. This oxidation is due to the lack of Hydrogen ions that are available to stop the free radical damage.

The human body is under siege by free radicals 24 hours a day, 7 days a week. Pollution, chemicals, fumes, toxins, and other poisonous materials only add to the damage that the body endures on a daily basis. The amount of free radical damage is equivalent to the amount you have aged. The best-known antioxidants prior to Dr. Flanagan™’s pure Hydrogen ion product were Vitamin E, Vitamin C, Green Tea Extract and Grape Seed Extract. Both Green Tea and Grape Seed Extracts have many times more antioxidant potential than either Vitamin E or Vitamin C. Scientific evidence proves that MegaHydrate is hundreds of times more powerful as an antioxidant than either Green Tea Extract or Grape Seed Extract. There is no known antioxidant more powerful than MegaHydrate. More importantly, because MegaHydrate is so pure, you get far more Hydrogen ions from a daily supplement of MegaHydrate than from eating pounds of raw fruits and vegetables and drinking gallons of water from the Hunza region. 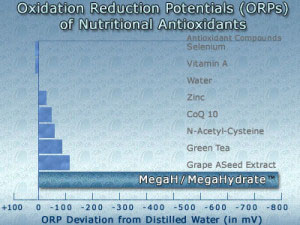 Two Hydrogen atoms and one Oxygen atom make water. Without water, there is no life. Dr. Flanagan™ stunned the scientific community with the discovery that the configuration of the minerals within the water, not just their existence, provides glacial milk with its unique hydration and life-giving properties. In order to replicate these beneficial elements of glacial milk water, Dr. Flanagan™ spent the past three decades on the development of a simple and easy-to-use Silica Hydride powder that can hold Hydrogen ions stable over time and releases them in your body when they come in contact with water. MegaHydrate is the product of a lifetime of research and development by Dr. Flanagan™. There is no other product available on the planet like MegaHydrate that delivers billions of negatively-charged Hydrogen ions to the cells of the body by simply taking it with water.

MegaHydrate contains the active ingredient Silica Hydride, a compound known to positively affect the “zeta potential” of blood cells. Zeta potential (x) is the electric potential, or charge, that exists in a hydrated particle and the surrounding solution. Zeta potential is an important and useful indicator that this charge can be used to predict and control the stability of colloidal suspensions. The greater the zeta potential, the more likely the suspension will be stable because the charged particles repel one another and thus overcome the natural tendency to aggregate. Zeta potential is an electrical charge that describes how far apart cells are. Greater zeta potential indicates more space between cells.

The following test has been performed and replicated by several groups of scientists with the same results. It provides yet more data indicating that MegaHydrate is a contributor to good health.

PHOTO 1 below shows a microscopic view of a blood sample from a subject with low zeta potential. The blood cells are clustered together and trap waste elements between them. Note the clustering effect may be a result of dehydration from caffeine, alcohol, heat, and stress: all commonly found in people today.

The test subject was given 500 mg (or two 250 mg capsules) of Silica Hydride – the active ingredient in MegaHydrate – mixed with 8 oz of water.

Twenty minutes later, another blood sample taken from the test subject was viewed under a microscope (as seen in PHOTO 2 below). The evenly-dispersed blood cells indicate high zeta potential. The blood cells appear pristine as if the substances trapped between the cells have been cleansed. The surface area of the cells has increased allowing exponentially more nutrients into the cells and more toxins to be removed. 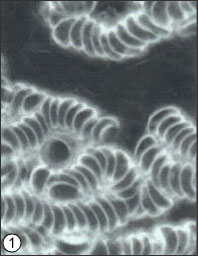 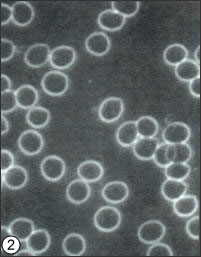 MegaHydrate’s Silica Hydride is the only known supplement to dramatically increase zeta potential. The population may be dehydrated. Why do people lack hydration? This may be due to a poor thirst mechanism as we get older (click here to read more), dissatisfaction with the taste of water, the consumption of caffeine and alcohol, climate controlled environments (both heated and air-conditioned), and excessive exercise. With water loss at 2% of body weight, individuals experience impaired physiological and mental performance. Double-blind placebo studies clearly demonstrate that the Silica Hydride in MegaHydrate dramatically increases total body water in just four weeks! 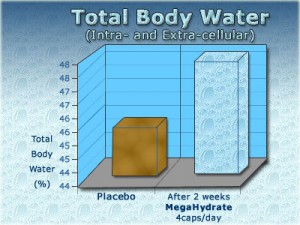 Combats dehydration and its symptoms in adults, children, and pets

One daily dose of MegaHydrate has more antioxidant power than hundreds of glasses of fresh vegetable and fruit juices, broccoli, brussel sprouts, leafy greens, and other foods rich in antioxidants to prevent free radical damage

MegaHydrate provides natural pain relief from headaches, sore muscles, and inflammation of the joints. Studies show that MegaHyrate increases energy production (adenosine triphosphate or ATP) by up to 4 times. Customers with fibromyalgia and other conditions associated with energy production and hydration find substantial pain relief.

*These statements have not been approved by the Food and Drug Administration and should not be treated as professional medical advice.

Get Megahydrate from our store:
https://www.secretenergy.com/product/megahydrate/